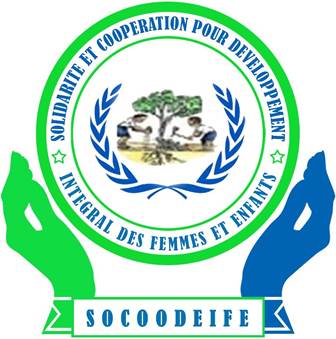 SOCOODEIFE is an independent, apolitical and non-profit local organization based in the province of South Kivu in Eastern Democratic Republic of Congo (Ex-Zaire).

It is operating with a registered office in Kazimia in the community of Gandja under Congolese law and fully recognized by the Congolese governmental authorities as an Organization.

SOCOODEIFE helps the women, widows and children in various ways. For the children the organization advocates for shelter, education, and food.  SOCOODEIFE supports women empowerment, and come to the aid of victims of sexual and gender based violence (SGBV) in the Democratic Republic of Congo and as well as other countries.

With women and children unrelentingly victimized by conflict related sexual crimes for decades now, SOCOODEIFE has focused more and more on maximizing the organization’s resources to help victims of Rape in the Uvira and Fizi in the region of South Kivu in the East of the Democratic Republic of Congo.

Since its inception in 1982, the organization has relied mainly on the membership contribution as a source of funding for its operation as well as completion of its various relief undertakings.

This sole avenue of financial support is a testimony to the members’ commitment to come to the aid of those in dire need in this conflict-riddled part of the country, despite of the fact that many of them may be subject to the same violent and harsh conditions prevailing in the area.